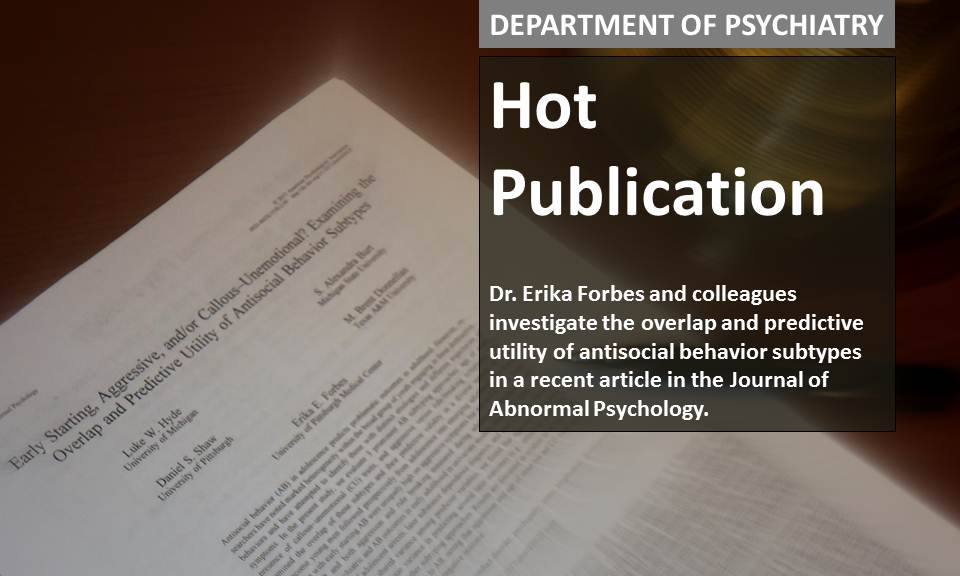 Antisocial behavior in adolescence predicts problematic outcomes in adulthood. However, researchers have noted marked heterogeneity within the broad group of youth engaging in these destructive behaviors. One strategy for investigating this heterogeneity is to identify those with distinct etiologies and different trajectories of symptoms.

Dr. Luke Hyde collaborated with Dr. Erika Forbes in the Department of Psychiatry and Dr. Daniel Shaw in the Department of Psychology at the University of Pittsburgh and colleagues at Michigan State University to evaluate three prominent antisocial behavior subtyping approaches.  Focusing on the age of onset, presence of callous-unemotional traits, and presence of aggressive versus rule-breaking symptoms, the researchers examined the overlap of these subtypes and their predictive validity in a diverse sample of 268 low-income young men who are participants in the Pitt Mother & Child Project, a study founded and led by Dr. Shaw, with the current phase led by Drs. Forbes and Shaw.  They followed participants prospectively from adolescence into emerging adulthood.

In their recently published article, Dr. Hyde and his co-authors discuss the results of this study in relation to the use of existing subtyping approaches to antisocial behavior, noting that aggression and age of onset but not callous-unemotional traits appear to be the best at predicting later negative outcome.

This article was published online in the Journal of Abnormal Psychology.  To view the abstract, click here.