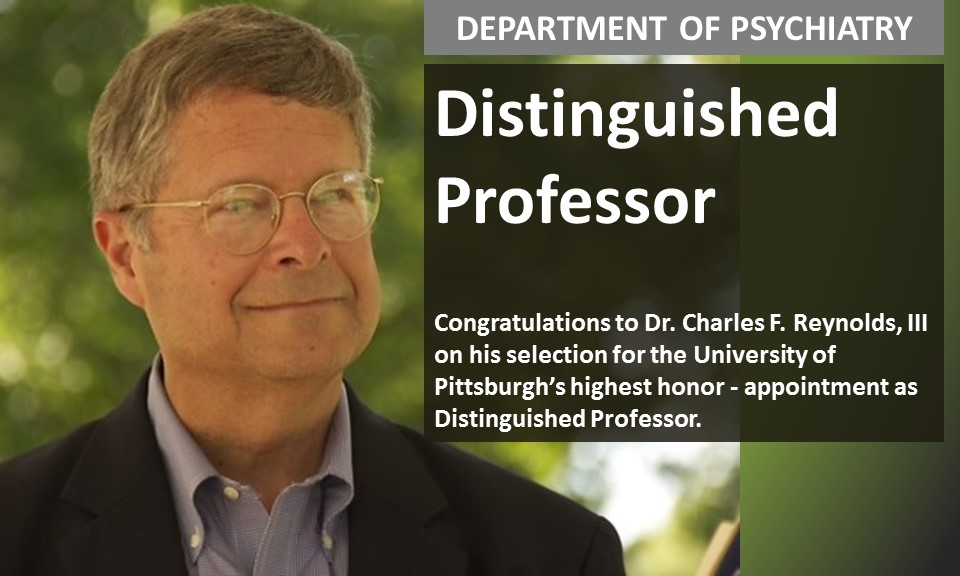 The Department of Psychiatry is honored to announce that Dr. Charles F. Reynolds, III, has been selected for the highest academic honor accorded by the University of Pittsburgh - appointment as Distinguished Professor.  This honor recognizes a recipient?s eminence and outstanding contributions in a particular field of study.

Dr. Reynolds, Professor of Psychiatry, Neurology, Behavioral and Community Health Sciences, and Clinical and Translational Science, and the UPMC Endowed Professor of Geriatric Psychiatry, is internationally renowned in the field of geriatric psychiatry for his research concentrating on mood, grief, and sleep disorders of later life.  He is particularly interested in the delivery of mental health services in primary care, improving treatment strategies, depression prevention, and promotion of brain health in older adults. In addition to his national presence, Dr. Reynolds cofounded the Global Consortium on Depression Prevention, a network of investigators in North America, Europe, Japan, Australia, and New Zealand.  He is frequently invited to serve as a consultant or member of task forces and committees convened by federal agencies and scientific organizations, and has served as a member of three Institute of Medicine study groups dealing with the nation?s geriatric health care workforce, the prevention of suicide, and sleep-wake disorders.   Dr. Reynolds has also been presented with numerous awards in honor of his work and scientific contributions including the Jack Weinberg Award for lifetime contributions to geriatric psychiatry from the American Psychiatric Association (2012), and most recently, the 2016 Pardes Humanitarian Prize in Mental Health from the Brain & Behavior Research Foundation for his pioneering work in geriatric psychiatry and the prevention and treatment of late-life depression.

Please join us in congratulating Dr. Reynolds on his selection for this honor.