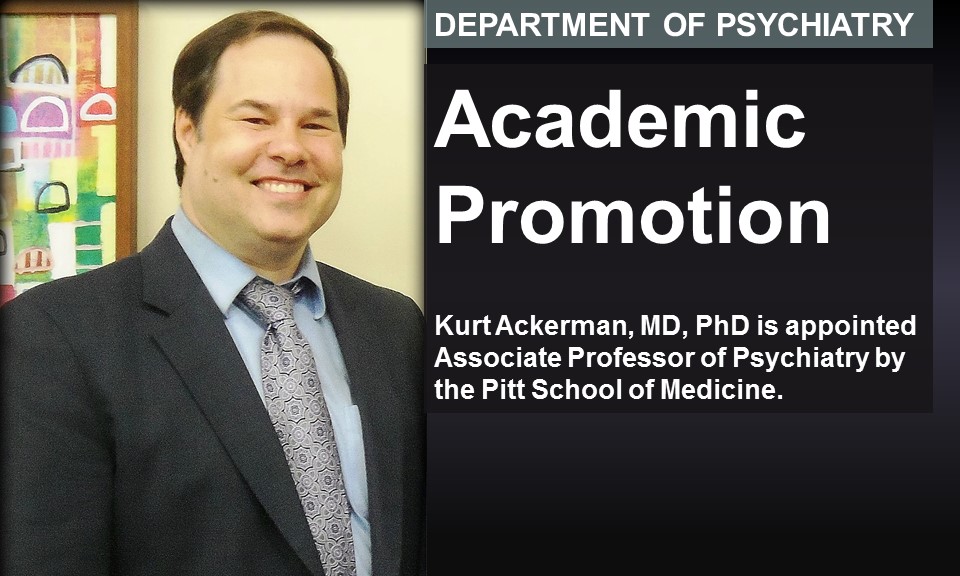 Please join us in congratulating Kurt Ackerman, MD, PhD on his promotion to the rank of Associate Professor of Psychiatry by the University of Pittsburgh School of Medicine.

Dr. Ackerman earned his medical degree from the University of Rochester and is a graduate of the General Psychiatry residency training program at Western Psychiatric Institute and Clinic (WPIC).  In 1997 Dr. Ackerman was appointed to the Pitt Department of Psychiatry faculty, where he has successfully pursued a clinical and administrative career focused on integration of medical and behavioral health care. For more than a decade, he has been an integral part of the Department?s efforts in these areas, particularly with respect to developing behavioral health electronic medical record systems which allow for best practice in quality of care and patient safety. He has also further developed services and education in consultation liaison psychiatry and psychosomatic medicine.

Dr. Ackerman has held a number of important clinical administrative roles at WPIC over the course of his career, including medical director for the WPIC Psychiatric Consultation Liaison Service (2004-2014) Service and, since 2009, Medical Director of the Adult Mood and Anxiety Service Line and Medical Director of Behavioral  Health Informatics.  He has contributed greatly to the creation and development of clinical programs including an award-winning telepsychiatry program, and population-specific clinical tracks, focused on multi-level continuum of care and integration between medical and psychiatric care.  Dr. Ackerman has also held other significant leadership roles at UPMC, including Vice President of Psychiatry for UPMC Shadyside Hospital (2007-2009), Chief of Psychiatry at Shadyside (2009-2011), and Chairman of Psychiatry at UPMC Magee Women?s Hospital (2011-2012). He is a member of the WPIC Pharmacy and Therapeutics Committee, the WPIC Safety Committee and the Behavioral Health Advisory Group. In 2011, Dr. Ackerman began serving as the Medical director for WPIC Information Technology (IT) which has now expanded to include all Behavioral Health Informatics across UPMC.  Although Dr. Ackerman?s activities are primarily in the clinical and education areas, he has also been involved in a number of research activities. Early in his career, he served as the Principal Investigator of an NIMH career development award to examine a biobehavioral model of stress and multiple sclerosis. He also received three other grants addressing various behavioral health aspects of multiple sclerosis including stress, depression, and serotonergic function.  Dr. Ackerman?s publication portfolio includes 15 peer-reviewed journal articles and several invited articles, book chapters, and other publications. He also has reviewed manuscripts for several medical and scientific journals including Psychosomatic Medicine, Brain, Behavior, and Immunity, and Psychosomatics.

In addition to his significant clinical and administrative responsibilities, Dr. Ackerman is one of the Department?s most talented educators and clinical mentors.  Dr. Ackerman served as the course director of the Consultation Liaison Medical Student Clerkship (2005-2009) and the Consultation Liaison Psychiatry Resident Teaching Program (2005-2010). He also played an important role the creation of the Department?s ACGME-accredited Psychosomatic Medicine Clinical Fellowship and served as the interim fellowship director in 2014.